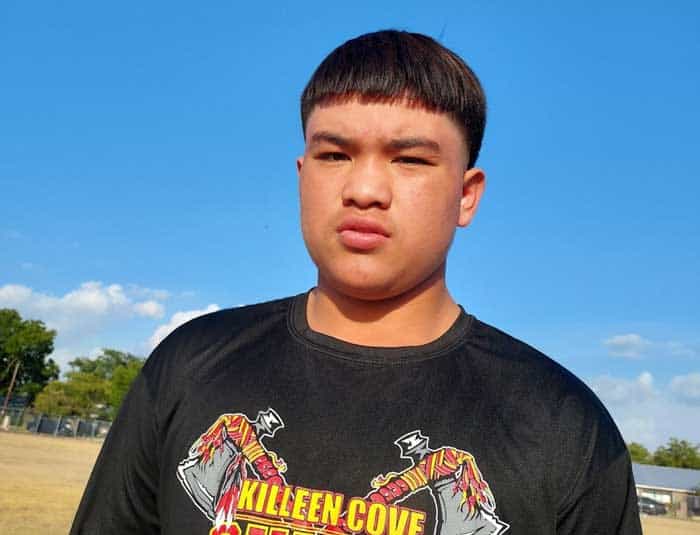 The class of 2028 fullback/lineman originally from Hilo, Hawaii – now living in Killeen, Texas – was named to the FBU Team Austin National Football Team in mid October 2021.

That team ultimately went to the national tournament in Naples, Florida and finished sixth overall. The opportunity to play alongside some of the nation’s best was not an opportunity that Sandiego took lightly.

“Being able to play with other athletes from different cities and programs is an experience,” Sandiego said. “We’re learning to have to gel together in a short amount of time to get our plays right.”

From there, Sandiego’s stock continued to rise as he was recognized for a slew of all-star game and showcase selections.

Among them were the All-United States Bowl Game in San Antonio, the Impact All-American Showcase in College Station, the Central Texas Elite Prospect Camp in Austin, Showcase Football in Houston, the NUC All-American Game in Savannah, Georgia and the Jr. Liberty Bowl All-Star Showcase in Bradenton, Florida.

“I can’t believe I get invites to many camps,” Sandiego said. “I see that my hard work and the way I play is speaking for itself.

“These opportunities are a life lesson. Meeting trainers and coaches at these camps help me put “tools in my tool box” for my game play.”

Sandiego will play with the Killeen-Cove Chiefs 12u team this fall and plans to attend Shoemaker High School down the road.

While he’s been working on becoming a fullback and his techniques at defensive tackle, he does have one favorite spot on the field.

“My favorite postion is DT,” Sandiego said. “I love working against another talented athlete and using my techniques to beat them.

“Learning to become a fullback is starting to become my favorite, I guess everyone wants to run the ball. For now its definitely defensive tackle.”

Though he plays several of the most intense positions in the sport, Sandiego says his game is “very mellow.”

“When I’m on the field I’m very focused,” Sandiego said. “I don’t celebrate nor have a swag to myself, it’s all business.”